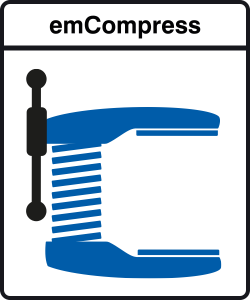 emCompress is available in three editions that cover different use of compression. Each edition is optimized for its use to provide the most convenient way to compress and decompress your data. 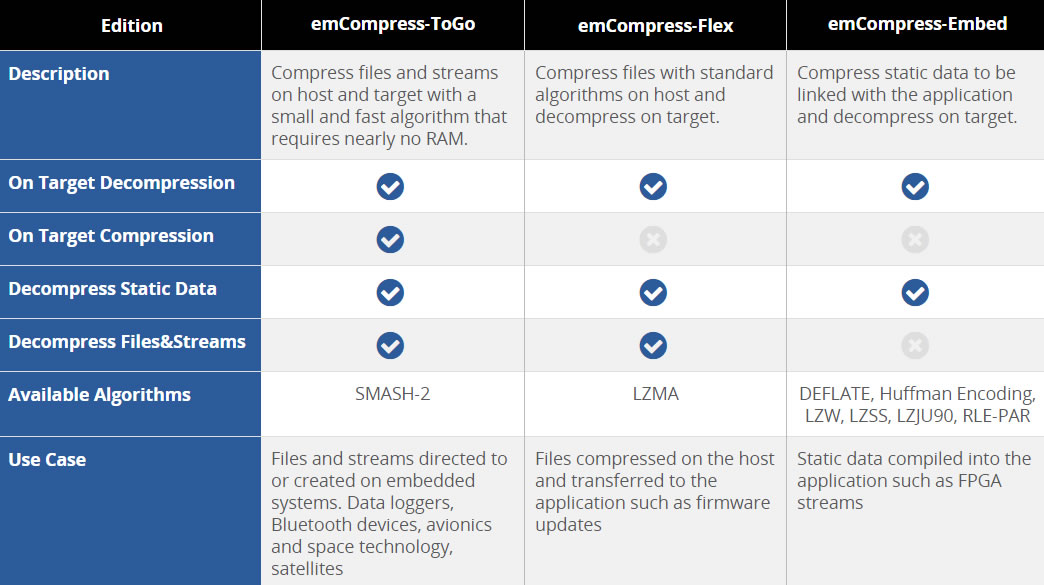 emCompress is written in well-commented ANSI C and is both compiler and target independent. In contrast to most compression libraries, emCompress is not covered by an open-source or required-attribution license and can be integrated in any commercial or proprietary product, without the obligation to disclose the combined source.

For firmware images of embedded systems it is important to have least ROM requirements to fit everything into the flash memory of the system. But typically, firmware upgrades are only growing in size over the lifetime of a device: features are added to the software and not taken away. A new update might eventually hit the limits of available memory.

A significant part of the firmware image might be static data, such as an FPGA configuration bitstream, static content for a web server, or images, fonts, and translations used for the GUI.

With emComress-Embed this data can be compressed into the firmware image to save memory. When the data is used, for example to send a web page to the browser, emCompress-Embed decompresses the data into RAM or directly sends the output to its destination.

emCompress-Embed can be used with little RAM on the target side for decompression. The amount of RAM available to the decompressor is taken into account during compression and an appropriate compression algorithm is automatically selected.

emCompress-Embed includes a compression application that chooses the best compression algorithm based on available target resources and input data and outputs the compressed data to be compiled into the firmware.

emCompress-Embed ships with the source code for all decompressors that can be used in the firmware. Since all compression algorithms are clearly separated only the decompressor that has been used to compress your data needs to be linked into the firmware, keeping the overhead as minimal as possible.

The size of data to be sent to a system or dynamically stored in its memory can have impact on the complexity of a system, too.

To transmit data, the communication channel and its bandwidth determine how fast it can be received by the system. Even the transmit of a relatively small firmware image for in-field firmware upgrades can be considerably delayed when sent through a cellular network connection. To keep such delays short, the goal is to send as small amounts of data as possible.

To store dynamic data in a system, the maximum storage usage needs to be known when designing the system and determine the required size of internal or external flash. Dynamic data can for example be a file stored by the user on system, such as a picture to be displayed, or web server content that is updated from an external source. To keep the flash size requirements small, only as much data as necessary should be stored.

The data to transmit or store can usually not be made any smaller. A firmware image has its fixed size to contain everything.

With emCompress-Flex those data can still be made smaller for transmit and store, and expanded when required. emCompress-Flex compresses the data before it is sent or stored.

In the system compressed data can be read from memory or received through any available channel. The data is decompressed by emcompress-Flex into memory or immediately passed to a user-defined function for direct processing. A compressed firmware image might be sent via the Ethernet connection to the system where emCompress-Flex directly receives and decompresses it to send the decompressed chunks to a firmware update function.

emCompress-Flex includes tools to compress files in a convenient way. The compression algorithms are also available as a library to be included into custom tools that prepare data to be sent to a system.

emCompress-Flex ships with the source code for all decompression algorithms to be included in the firmware. One or multiple algorithms can be selected to be available to the system. Usually one algorithm is sufficient, and the best one can be determined on system design, based on what kind of data needs to be  compressed.

Most common compression algorithms require lots of RAM for compression and decompression, which is fine on a computer with gigabytes of memory. But on an embedded system you might only have some kilobytes of RAM available. Therefore the decompressor implementations in emCompress-Flex and emCompress-Embed are already tweaked to run with the least amount of RAM.

To be able to go even lower with RAM requirements, SEGGER developed a compression algorithm that is suited to run on the smallest micros: The Small Microcontroller Advanced Super High (SMASH) Compressor. SMASH can decompress data with only a few bytes on the stack.

emCompress-ToGo includes SMASH to enable use of compression on any system. With emCompress-ToGo and SMASH, data cannot only be decompressed on target. The compressor sources are included, too.

Any system that generates or collects dynamic data, for example an IoT sensor or a data logger, can benefit from data compression with emCompress-ToGo. The system requires less (external) memory to store its collected data and can send more data with limited bandwidth, such as through a Bluetooth 5 Long Range connection.

emCompress-ToGo comes with the small and fast SMASH compressor and decompressor in source code that can be included into any application, firmware, or bootloader.