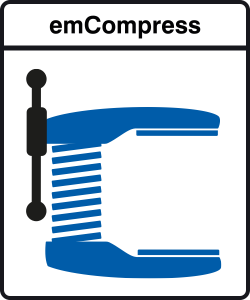 SMASH compresses efficiently, decompresses quickly, requires only a few words of decoder state held in machine registers, and is very small. Compression is as efficient as other LZSS-based codecs. Decompression is far simpler than with these codecs, resulting in an ultra-small memory. The decompressor is also far simpler than in these formats and so also delivers an ultra-small memory footprint.

SMASH-2 works well with virtually any kind of data. The table below displays the compression ratios for various use cases.

In most cases, no RAM is required. Since SMASH works with references, it uses the uncompressed part as a “window”. In the case of stream compression, blocks of 2 KB can be processed at a time. In some cases smaller blocks can be processed, down to as small as just 256 bytes.

The amount of data collected and stored by data logging makes this a prime application for compression. emCompress-ToGo enables the storing of compressed data logs, saving storage requirements and memory resources.

Networks of connected IoT devices can suffer from congestion as more and more devices communicate with each other, with brokers, or with the Internet. With low power communication channels and mesh setups the available network bandwidth for each device is limited. To efficiently use the network, messages should be kept as small as possible.

With emCompress-ToGo messages to be sent on a network can be compressed and decompressed by the sender and receiver on the fly, resulting in less traffic on the network, reduced bandwidth requirements and in many cases lower power consumption for senders, receivers and relays.

In space and avionics applications, such as satellites, communication channels are not only restricted by bandwidth, but by the distance that data has to be transmitted. In long-distance communication, data packets can get lost more easily and require retransmission.

emCompress-ToGo can compress any communication data to reduce the number of packets to be transmitted, reduce retransmissions due to loss data and therefore speed up long-range communication significantly.