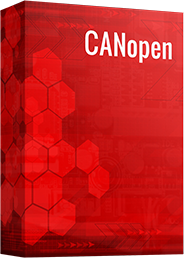 Displaying all implemented objects as a tree facilitates the configuration by hand.

Devices with up to 8 device profiles are supported.

The tab Action is used for reading and writing device objects with CANopen SDO transfer messages.

Optionally a slider with a user defined value range can be assigned to every object to achieve a more useful configuration. For each object the meaning of each bit can be displayed by special bit boxes. There are already prepared bit boxes for special objects like the CiA 402 control word. 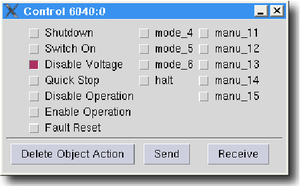 Values of manually configured device objects can be stored to a file and reloaded into the device.

The NMT tab makes several fields available for the execution of NMT services like Start All, Start Node, Preop All, Preop Node and Scan Network. The device properties of the currently present nodes in the network are shown as well.

A graphical network overview displays all devices in a CAN- open network. 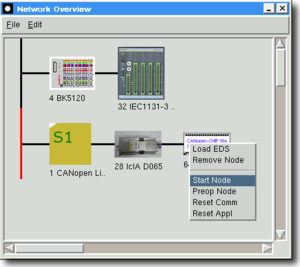 Network configurations can be can be saved in project files.

Under the tab Description an object description of the currently selected object in the object tree is shown. The description is taken from a text file which is created by the CANopen Design Tool or manually written with a common text editor. 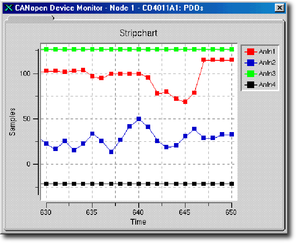 The integrated process image summarizes the most important process variables of the network. The data can be received via SDO and PDO. 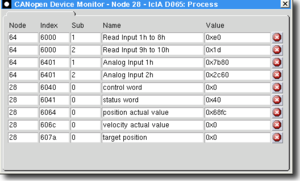 The PDO tab allows the simple configuration of the PDO-Mapping by Drag&Drop. Additionally PDOs can be sent and received and data from received PDOs can be plotted in a stripchart with one click. 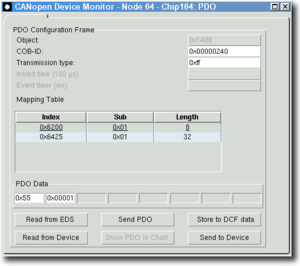 Additional tabs are available for further graphical representations of CAN data and can be defined by the user.

Extensions to control drives according to CiA 402, a CANopen-Safety-Plugin (CiA 304) and a LSS-module (CiA 305) are additional available.

The CAN communication can be logged, saved and evaluated afterwards. The console is an extra feature. With the console an interactive access to the CANopen network is possible by using commands for: 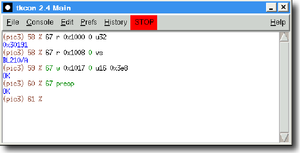 By using the CANopen Library and the CANopen Design Tool from port the developer gets a closed tool chain for creating CANopen compatible devices.

Through the scripting language access to elements of the graphical interface is also available. The graphical representation of values or test results is therefore application specific extensible.

port GmbH can perform special adaptions to the GUI or behavior to meet CANopen device characteristics for service or assembly testing.

The usage of the CANopen Device Monitor requires a CAN interface. CAN interfaces are currently available for USB, ISA, PCI, parallel port, serial port and PC-104 or an Ethernet interface like the standalone CANopen-Gateway-Server EtherCAN of port

The CANopen Device Monitor is a tool for the graphical inspection and configuration of CANopen devices in a CANopen network. The embedded scripting ability makes it possible to access the implemented CANopen services and to write test or control applications with a minimum of effort. The information on how to display the device object dictionary is obtained from the EDS file of the device (EDS - Electronic Data Sheet) or can be scanned from the device directly. Special device configurations can be loaded, stored and scanned from DCF files.

The eval version is limited to 125 kbits/s and it supportes only the node-IDs 32 and 64.

Please download the version for your operating system. On Windows start the corresponding setup.exe. On Linux unpack the files from the archive to an arbitrary directory.

Note: The extensions require a full version of the CANopen Device Monitor.