With the CAN-IB410/PMC HMS offers an interface board based on a modern and highly modular concept for PMC systems (PCI Mezzanine Card). The board covers a wide range of field buses, such as CAN (ISO 11898-2), fault tolerant CAN (ISO 11898-3) and LIN.
The CAN-IB410/PMC is available with up to four CAN channels with galvanic isolated interfaces. For use in the automotive field the high-speed CAN channels can optionally be switched to low-speed CAN via software. In addition, the card can be equipped with up to two LIN interfaces. Furthermore, the modular architecture of the interface card enables the easy extension with customer specific interfaces via piggyback modules.

Due to the high number of interfaces, the board is also suitable for demanding applications - such as test benches, handling systems or manufacturing plants. If necessary, the number of interface channels can be extended by using multiple cards within one PC. The board is supported by the IXXAT driver packages and higher layer protocol APIs as well as by the IXXAT tool suite. 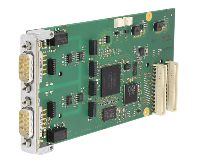